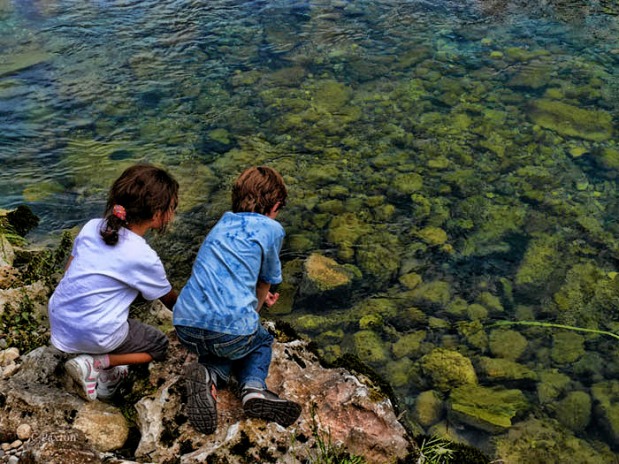 Fish watchers on the banks of the Lyvennet river, Maulds Meaburn may now see Atlantic Salmon.

Local children designed the information signs beside Maulds Meaburn’s Salmon ladder at the Lyvennet Weir, and today’s news release from The Environment Agency (8th December 2014) will be greeted with excitement by young and old in the Eden Valley, Cumbria. 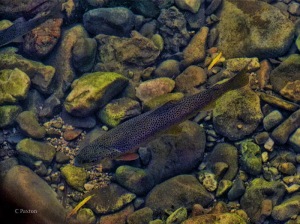 According to the release, over 20 Atlantic Salmon spawning sites or redds as they are known, were documented this week along the stretch of river that was improved by Eden Rivers Trust (ERT) earlier this year in a joint project to naturalise the course of the Lyvennet river.

This highly ambitious groundwork project restored straightened parts of the Lyvennet and Howe Beck back to a natural meandering state, for benefits to people and wildlife (See related article). The project is already reaping great success with over 20 salmon redds seen this week in the restored reach of the Lyvennet river at Maulds Meaburn.

The Atlantic Salmon had completed one of the most iconic migrations in the natural world, they travelled to the rich feeding grounds of Iceland and Greenland, before journeying some 3000 km home to the becks of their birth to become parents themselves!

The Lyvennet river channel was originally straightened for land management purposes and the increased energy in the river water leads to the river removing the smaller gravels necessary to support spawning. Furthermore, the lack of bends, associated scour and natural features, prevented the formation of vital pool and riffle habitats for a range of wildlife to thrive.

Reinstating the river back to its natural state has brought multiple benefits, including creating larger, diverse habitats for plants and animals to flourish. More natural, meandering rivers also help alleviate flood risk by slowing the flow of the river, and reducing bottle necks. This can delay both the height and timing of flood flows, benefiting communities downstream, without increasing flood risk upstream.

The Lyvennet scheme is part of a wider Cumbrian River Restoration Strategy that is tasked with restoring rivers back to a more natural condition, made possible by a partnership between the Environment Agency, Natural England and the Rivers Trusts across the county.
It is part of an ambitious package of significant restoration projects being delivered in the UK right now which all deliver improvements for ecology, habitat and local residents.

“Hopefully this scheme along with the other excellent work Eden Rivers Trust is doing will help reverse the trend of decline in spawning salmon in the river Eden.
“It has been amazing to see the river Lyvennet transformed in such a short space of time and to have evidence of spawning so soon after the restoration is fantastic news and confirmation that this improvement in habitat has measurable results.  We, the community in the area, are very proud of what ERT have achieved and wish to thank them very much.”

“The welcome return of spawning salmon to this section of restored river is wonderful news. Key to the success of the project has been the close co-operation and support we have received from farmers, landowners and partners.
However, we should remember that Eden salmon populations are in a state of decline. This project is part of ERT’s Saving Eden Strategy which will help to conserve this iconic species for future generations”.

“It is fantastic news that following our river restoration project, already Atlantic Salmon have been recorded in the reach building redds.
However, while improving the river environment will help to improve salmon stocks, it is not enough on its own and we need to work together with anglers so we can review measures that would increase the number of salmon surviving to spawn.”

In early 2015, ERT will be organising a community tour of the restored reach of the Lyvennet including an opportunity to plant riverside trees. See www.edenriverstrust.org.uk for future announcements!