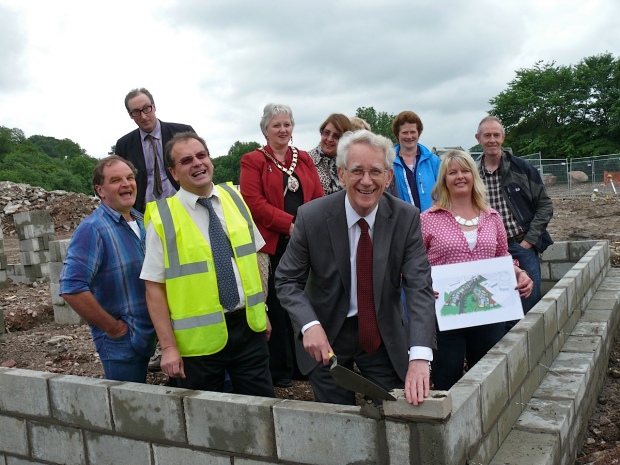 Andrew Stunell MP, Parliamentary Under Secretary for Communities and Local Government with responsibilities for Housing and the Big Society laid the first brick in the Lyvennet Community Trust's affordable housing project.

Tuesday 19th July – Crosby Ravensworth enjoyed a ministerial visit from Andrew Stunell MP, Parliamentary Under Secretary for Communities and Local Government with responsibilities for Housing and the Big Society. The rain held off as this personable gentleman laid the first brick in the Lyvennet Community Trust‘s affordable housing project. He spoke at length with members of the community about the project and was clearly impressed by the dedication, determination and drive demonstrated by Mr. David Graham, Chair of the LCT and the others members of the trust involved in having achieved so much. 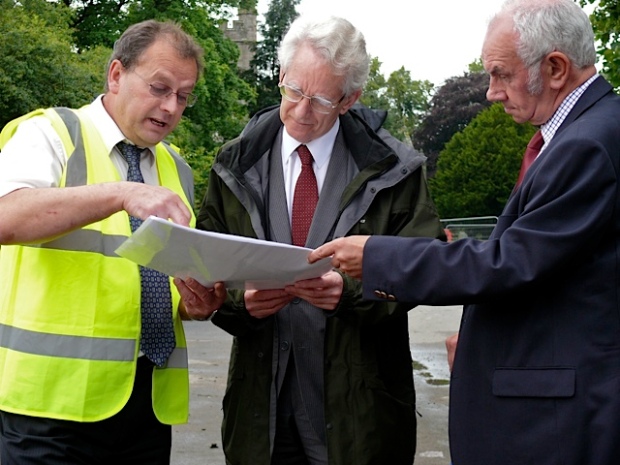 David discussed the plans with the MP and Mr. Gordon Nicholson before the commemorative brick was laid.

After celebratory applause and photography Andrew walked with the crowd up to The Butcher’s Arms community pub. Here he was met in the doorway by a lad with a spade who’d paused to take a breather – the volunteers had been hard at it. Andrew inspected progress and was full of praise for the hardworking volunteers’ efforts, he then delivered a very encouraging speech in the soon-to-be completed bar area. In the course of his speech he remarked upon the exemplary nature of the project, the importance of maintaining the pub as the heart of the community and as service hub and the delightful scenery which he felt sure would be powerfully attractive to visiting patrons, of which, he declared, he expected to be one!